Saturday February 11th | 3RRR live to air performance | The Party Show 102.7fm | Tune in from midnight – 2am
link to website “Shiver Canyon is laced with lush harmonies, which carry the lovely, winding vocals to unexpected places.

There’s nothing predictable here melodically, which makes for a wonderfully refreshing and interesting listen. Roni Shewan’s voice is unique and strengthened by the vocal layering that is featured on most of the tracks. The combination of her vocals and echoing instrumental embellishments create a dream-pop vibe that’s super calming. Each track keeps you intrigued with the climactic song structures, reverb-soaked synths and choral accompaniment. This is a very cohesive offering and truly works best when listened to in sequence. 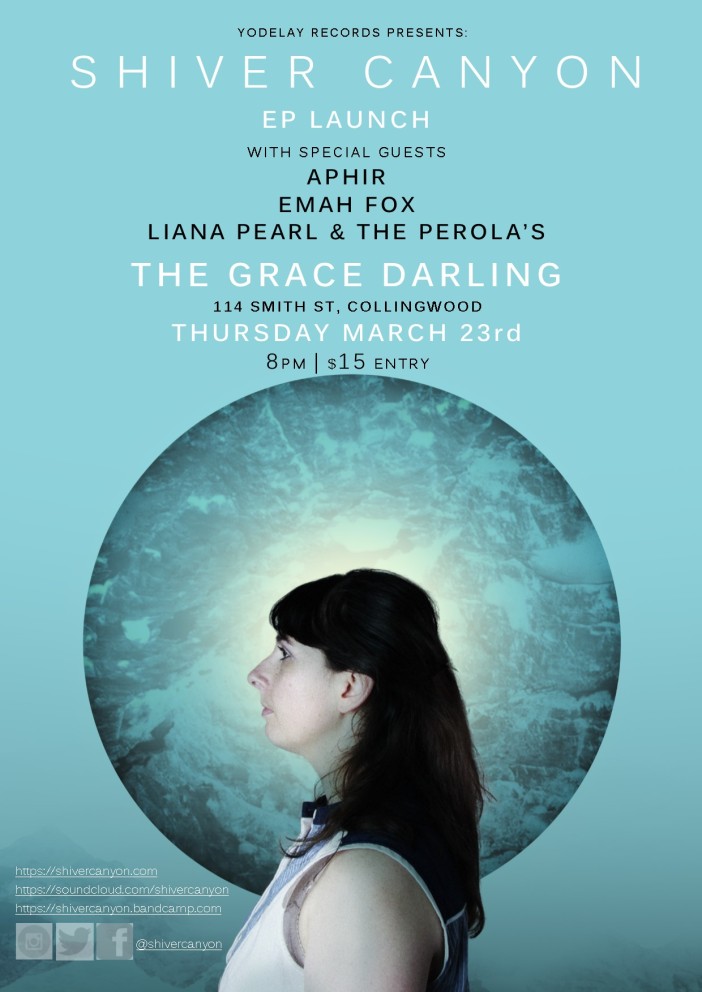 Aided by Roni’s powerful, jazz infused vocals, Shiver Canyon has impressed audiences with an audio-visual, dynamic and evocative live show. She has shared the stage with some of the country’s finest performers, including Aluka, The General Assembly, Whitaker and Closure in Moscow.

We are playing an intimate show at Long Play on Saturday December 10th, previewing songs from our upcoming EP release. Joining us on the bill will be fellow electronic artist Emah Fox, playing a special solo set.

The night will also be a chance for audiences to see the Flawed film-clip on the big screen during our set. Entry is absolutely FREE and it all kicks off at 8pm.

That’s right people! Flawed is out today through Yodelay Records. You can purchase it from the iTunes store and stream via Spotify, Google Play Music, SoundCloud, Bandcamp and other streaming providers.

We are very excited to announce we will be interviewed on  Syn fm‘s Get Cereal tomorrow morning, in promotion of Flawed, which is out on Tuesday. Tune into 90.7fm at 8:30am tomorrow to hear us chat about the single and upcoming EP. The guys at Get Cereal will also be giving Flawed a spin.

We are proud to announce the release of our haunting, lush, single Flawed, on November 1st, 2016. The single is a taste of things to come, with the eminent release of our debut EP early 2017.

Out through Yodelay Records and co-produced by Red Black and Roni Shewan, Flawed is a blend of acoustic and electronic elements, with subtle instrumentation, East-Asian percussion and sophisticated vocal layering. A moody exploration of trip-hop, the song references ambient, lounge and jazz genres, with lyrical themes of self-loathing, depression and personal growth.

Flawed will be available for purchase at iTunes and the Yodelay website, and via streaming channels.